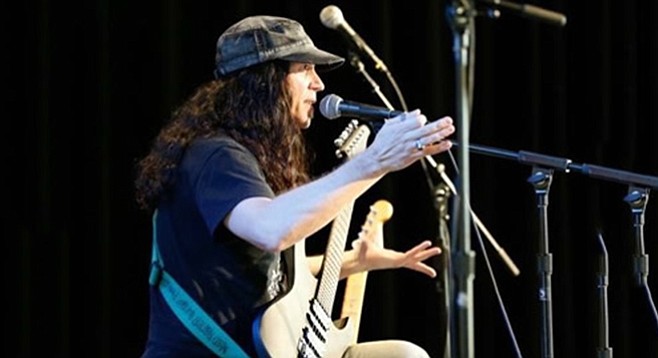 “We want to be the next Wayne’s World,” says Mike Ruggirello of online music TV program Theory Thursday. Best known as guitarist with the rock bands Fusebox and Dark Lumen, Ruggirello and a guest are featured trading stories about technique and gear in a funky North Park garage studio, a setting not unlike the famed SNL skits.

The show began airing live on March 24, 2017, with more than 50 artists taping episodes since, including jazz performer Wayne Riker, indie rocker Ariel Levine, and teenage blues guitarist Anthony Cullins. “So far, it’s been San Diego-based performers, but I hope to expand beyond that soon,” Ruggirello said.

He came up with the show as an extension of his day job as a music teacher. “I started making guitar lesson videos on popular songs and theory, hence the name Theory Thursday,” he said. “I made about fifty of these videos and I was very interested in growing my audience, so I came up with the idea to interview guitar players that I truly admire and respect here in the community.”

Currently the show has four people involved; host, marketer and booker Ruggirello, co-host Jason Thomas, technical director/videographer David Wright and director of photography Matthew Moran. Using five cameras, Theory Thursday is filmed live and broadcast on Facebook and archived on YouTube from his studio, with 5-10,000 viewers each week. Though he’s open to all types of music he does have a favorite type of guest. “I really gain something off each and every one who appears, but my particular favorites are the players who are guitar teachers.”

Like many other music blogs, Theory Thursday has endorsements with various music related businesses, in this case including Taylor Guitars and rhythm box makers, Beat Buddy, but the show also has its own branded product; a line of guitar strings, courtesy of sponsor Curt Mangan Strings, available in 9, 10, & 11 gauge.

“We started Theory Thursday Strings in late 2017 and as of this year they have become available to the public to purchase online,” said Curt Mangan Marketing Director, Samantha Taylor Cameron. “Endorsements depend on the artists networking and promotional abilities. Beyond talent, we look at followers and their show schedules. We also do not endorse anyone just looking for handouts. We work with artists who truly appreciate and love the strings. It’s easier to promote something you are passionate about rather than something that is just given out.”